What is Bereavement Leave?

Loss affects our ability to focus on work and often leaves us feeling overwhelmed. It’s an inevitable part of life, but many businesses don’t understand the importance of providing bereavement leave for their employees.

The fact is, bereavement leave isn’t a legal necessity but most businesses should offer their staff time off to deal with losing a loved one. You don’t have to include bereavement time off in an employee's contract, but most specialists recommend that you offer some type of leave during difficult times. In some cases, employers grant time off but refuse their employees bereavement pay.

Not giving your employees bereavement leave might increase employee disengagement and higher employee turnover rates. Also, not offering this might have a negative impact on the overall employee experience. If you're interested in learning via video, then watch below. Otherwise, skip ahead. 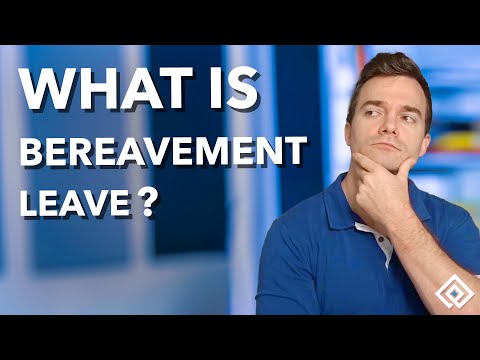 Here’s everything you need to know about bereavement leave.

During bereavement leave, your employees can arrange a funeral, grieve and plan with other family members.

If you’ve ever suffered a loss, then you’ll know how hard it is to concentrate on work while you’re trying to grieve, so bereavement leave is very beneficial. While most employers are understanding during times of loss and will offer bereavement leave there’s no federal law stating they must do so. In fact, Oregon is the only state that ensures employers grant their staff members bereavement leave.

Why is Bereavement Leave Important?

Deciding whether to offer bereavement leave is a common issue for businesses, but it shouldn’t be. The main reason companies refuse bereavement time off or bereavement salary is the worry of profit loss and understaffing. However, reports show that not implementing a bereavement policy is counterproductive. A large number of managers focus on aspects like performance management or employee incentive programs, leaving bereavement leave at the bottom of the priority list.

Most businesses offer their employees a maximum of three days' leave in the event of bereavement and don’t think about their own experiences with loss. Have you lost someone you loved? Could you deal with that loss in three days? Of course not! The biggest issue with short bereavement leave is employees have to return to work but they’re not in the best frame of mind.

We all handle grief in different ways, and while some people use work as a distraction, others need time to deal with their loss. If you don’t allow your employees to address their grief, they are susceptible to depression, anxiety, insomnia, and even breakdowns. Specialists are advising employers to adjust their bereavement policies so that employees get more time to deal with the complex grief process.

Numerous studies show that grief reduces productivity, and companies can lose money if they don’t have a good bereavement policy. Those affected by loss are more understanding of their employees, but most companies offer the bare minimum bereavement leave.

The Fair Labor Standards Act ensures employees get fair wages and treatment from their employers. However, they have no specific laws or guidelines about bereavement pay. While most companies offer a form of bereavement leave, it’s worth considering including bereavement salary for your employees. We’ve all dealt with loss in our lives and showing your team you support them at a difficult time will increase their loyalty to the company.

Oregon is the only state that has bereavement leave legislation in place. Employees that work at least 25 hours a week for 180 days out of the year are entitled to two weeks of paid bereavement leave. Illinois allows leave if a child passes away, but companies are subject to the law if they have 50 employees or more.

In all other states, bereavement leave is up to the company. This means you get to decide how much bereavement leave you should offer, and whether to pay employees or not. Remember, that people are entitled to paid sick leave, so why shouldn’t they have time off in the event of a loss? Think about how your employees are feeling and try to understand their circumstances. Loss is one of the hardest experiences we ever must face, and offer paid bereavement leave as part of an employment package can help you build a more productive workforce in the long term.

If you're creating a bereavement leave policy, make sure you outline it in the employee's contract. Your bereavement policy should include:

Unfortunately, some employers don’t understand how important bereavement leave is and refuse to accommodate their employees. As the law stands, there’s nothing an employee can do about this but the negative effects of bereavement can impact your company. Read about the details for introducing a bereavement leave policy in your organization below.

If you’re struggling to implement a bereavement leave policy, these are the vital things you need to consider.

Many businesses offer their employees three days of paid bereavement leave and two days of unpaid leave. Doing this allows you to show your team that you’ll support them through difficult times and minimize the financial implications. Most people understand that their bosses have financial responsibilities and appreciate being offered time off.

If you own a larger company, then you should think about your responsibility to every employee and aim to introduce a more comprehensive bereavement leave policy. Businesses that have the resources should allow their team a reasonable amount of time to grieve and note the example other companies are setting.

Facebook is one of the largest companies in the world, and its bereavement policy reflects its success. The company offers its staff members 20 days of paid leave for immediate family members and 10 days for extended family. The company attributed its policy to the experiences their senior management team has had with loss, understanding how important time off to grieve is.

Bereavement salary is not a luxury, but it is something employees expect during times of need. In recent years businesses have noticed the importance of a work-life balance and stress is the number one cause of workplace absences. Forward-thinking employers recognize that the happiness of their staff is central to a company's growth and continued success, so we can hope other companies follow in Facebook's footsteps.

The last anyone wants to do is speak to their employers when in an emotional state. Loss affects everyone and you should try to console your employee and understand they’re emotional. Empathy is key to dealing with bereavement in an effective manner, and this helpful guide can make your workplace a more harmonious place.

How you handle bereavement leave requests depends on how large your company is, and the working environment you create. Professional companies with lots of staff members might have a dedicated HR team to handle bereavement requests and a set of guidelines and policies they must follow. If you own a smaller company and have a strong relationship with your employees, they’ll come to you with their requests.

If you will offer bereavement leave to your employees, consider asking them to request it in writing. You can set up a company procedure for handling requests through email or writing. Not only will this make it easier for you to keep track of the requests, but it’s also better for your employees as many won’t want to come to work and speak to you if there is a sudden loss in their family.

You can arrange a meeting with your employee if you’d like to negotiate their bereavement leave, but it’s vital to ensure any collective bargaining agreement you both reach is recorded in writing.

If you're interested in learning in-depth about bereavement leave and mastering other HR fundamentals, then check out our HR Certification Courses.

You can discuss a range of options with your employee, but one of the best ways to allow them time off to grieve is by asking them to use some of their sick days. The law states that a person can take sick leave when an immediate family member dies if they’re attending a funeral.

The US Office of People Management allows employees to use 13 days of sick leave each year to deal with family issues. However, if the individual is planning or attending a funeral, then you’re allowed a maximum of three days.

If your employee has used their sick days already, ask them to use their personal days as bereavement leave. Most people want to attend funeral services and spend time with their family so they’ll agree to your suggestions.

Bereavement leave is about saying goodbye to our loved ones and taking time to grieve. If you’re unable to offer bereavement time, try to understand and accommodate your employee's needs. Remember, an individual's health should always come first so explore every avenue possible to enable your employees time to readjust to normal activities.