30+ Important Diversity in the Workplace Statistics 2023 It is important to be aware of these statistics to build a better internal workforce that will yield higher revenue, boost employee performance, and promote a cohesive and inclusive work environment.

There is a rapid rise in diversity in the workplace. Here are some examples of how the world is changing.

By 2044, groups formerly viewed as minorities will reach the majority status. Previously underrepresented groups are projected to account for most of the U.S. population.

According to the United States census, women represent 58.3 percent of the U.S. workforce, while men represent 41.7 percent. On top of that, women’s participation in the workforce has grown by more than 17 percent since 1950.

Payscale research states that black women make 0.97 dollars and Black men make 0.98 dollars for each dollar made by a white man with the same qualifications and job. For example, over a year, a White male employee makes a median salary of 74,500 dollars, a black male makes 73,000 dollars, and a Black female makes 72,300 dollars.

White candidates are 2.1 percent more likely to receive an interview callback than black candidates. Researchers sent 83,000 applications to Fortune 500 companies and found that distinctively black-sounding names got fewer calls than candidates with white names and the same application information.

According to research, many Black and Hispanic employees in the United States quit after witnessing or experiencing workplace discrimination.

Women in Education and Health Sectors

Single black mothers are more likely to participate in the workforce than mothers of other ethnicities and races.

A BLS research that looked at working women with kids under eighteen found that 77.2 percent of Black mothers, 71.2 percent of white mothers, 65 percent of Asian mothers, and 63.9 percent of Hispanic mothers participate in the United States workforce.

During the pandemic, men working from home and looking after children had more chances to receive pay increases and promotions than women in the same position.

The LGBTQ+ community makes up 6.28 percent of the United States workforce. It is estimated that seven million LGBTQ+ people are employed in the private sector, and more than one million are working in the country’s public sector.

Seventeen states in the United States have no state protections against workplace discrimination based on sexuality or gender identity.

Although 4.5 percent of the American population identifies as LGBTQ+, approximately 34 percent of the country doesn’t have laws protecting against workplace harassment and discrimination based on sexuality or gender identity.

The LGBTQ+ community believes their sexuality or gender identity will negatively affect their careers.

Transgender individuals are more likely to consider leaving their company after six months than cisgender people.

According to McKinsey Company, thirty-two percent of trans people frequently think about leaving their company, and 18 percent expect to stay at their current company for less than 12 months, compared to 21 and 8 percent, respectively, of cisgender people.

Forty percent of employees want their companies to be more inclusive in hiring members of the LGBTQ+ community.

Many employees feel that their companies don’t do enough to increase diversity in sexual orientation.

By 2050, immigrants and their children will represent approximately 83 percent of the working population in the U.S.

Research suggests that the ratio of non-white people participating in America’s labor force will increase as the nation becomes more diverse. Yet, according to census data, there will be no racial or ethnic majority in the United States by 2050.

The percentage of female, Black, and Hispanic employees increased significantly between the span of 1999 to 2019.

Thirty-three percent of organizations in the U.S. are more ethnically and racially diverse than the national average.

This number dropped a little between 2015 and 2018, but it is expected to rise due to current workplace racial equality issues.

Thirty-seven percent of job seekers and employees have reported that they would not apply for a job with a company with negative ratings among people of color. In addition, studies show that workplace diversity is especially important to young job seekers in the Gen Z and Millennial generations.

Forty percent of workers surveyed by CNBC mentioned that the last year’s events had made diversity more of a priority at their companies. In addition, the Black Lives Matter (BLM) movement has been a driving force for many new diversity and inclusion efforts in American businesses.

More than ninety percent of whites, Blacks, and Asians in the American workforce are twenty-five years old and have a high school diploma.

Seventy-six percent of Hispanics have a high school diploma among the same age group. However, higher education was most prevalent among Asians aged twenty-five years and older, with sixty-three percent of Asians holding a Bachelor’s degree or higher.

According to the U.S. Bureau of Labor Statistics, the amount of employed individuals aged 75 and older is expected to grow by 93.7 percent. However, the employment rate for people between 16 and 24 is estimated to drop by 7.7 percent.

Between 1999 and 2029, the percentage of United States workers aged 75 and older is expected to grow by 12.5 percent, while the employment percentages of all other ages are expected to decrease.

The rates were significantly lower for white people, at 4.6 percent, and for Asians, at 4.7 percent. Fortunately, all of those unemployment rates are down significantly from the same time in 2020.

The average unemployment rate for Hispanics or Latino ethnicity is 1% point higher than for those who are not.

As per BLS reports, the national unemployment rate for Hispanics and Latinos was 4.7 percent in 2018, while the number for non-Hispanics was 3.7 percent.

Unemployment rates differ by gender, but more so among Hispanic Americans and Black Americans than Whites and Asians.

Most people unemployed during the height of the COVID-19 pandemic were women. Approximately eighty percent of the 1.1 million American workers who left the labor force in September 2020 were women.

Amid the peak of the coronavirus pandemic, the LGBTQ+ community faced more unemployment than the general public. According to an LGBTQ+ advocacy group poll, seventeen percent of gay, bisexual, lesbian, and queer Americans lost their job due to COVID-19, comparatively to thirteen percent of the general population.

The unemployment rate was relatively higher for LGBTQ+ people of color, with twenty-two percent reporting losing their jobs because of the global pandemic.

In 2021, the unemployment rate will be higher for middle-aged people than for those over fifty-five.

In 2020, the unemployment rate for people with disabilities rose to 7.9 percent. In addition, across all age groups, disabled people are less likely to be employed than people without disabilities.

Workplace innovation and diversity attract a larger pool of candidates during recruitment. As per the National Association of Colleges and Employers survey, seventy-nine percent of new graduates rate work diversity as important.

Diverse companies have happier and more satisfied employees than companies with low diversity levels. Companies in the U.S. with greater ethnic and racial diversity have higher performance rates. For example, businesses with more diversity among staff perform 35 percent better than companies whose employee demographics only match the national average.

Diverse companies are more equipped to capture a bigger market and generate more cash than companies without inclusion and diversity campaigns. For example, the entertainment industry is losing a projected 10 billion dollars yearly because of inclusivity and systematic issues, and the lack of representation of Black populations in T.V. and film.

Over the past few decades, diversity in the U.S. workplace has drastically improved, with the percentage of Black, Hispanic, and female employees growing by 26 percent, 98.1 percent, and 18.5 percent, respectively, between 1999 and 2019.

As of 2022, immigration reform is a factor in workplace diversity, with children of immigrants expected to represent eighty-three percent of the working population in the U.S. by 2050.

With profit margins growing among firms with diverse staff and seventy-six percent of employees and job seekers prioritizing workplace diversity, the future of diversity in the United States labor force looks bright.

Does diversity in the workplace make a difference?


Yes, diversity in the workplace makes a difference. For example, companies with ethnically and racially diverse leadership teams are thirty-five percent likely to outshine companies with less diversity. Equal gender diversity has been shown to have a twenty-one percent impact on revenue compared to companies that heavily favor one gender.

What are examples of diversity in the workplace?

Prominent examples of diversity in the workplace include:

By including people from different backgrounds along these vectors, a workplace benefits from a greater number of voices, life experiences, and opinions.

What is the benefit of diversity in the workplace?

There are many benefits to having diversity in the workplace. First, a company benefits by having access to a variety of backgrounds, life experiences, and opinions that can help create an organization that’s inclusive and respectful of all people.

People who all come from the same background might have an easier time making a cohesive company culture, but they’re also more likely to share the same blind spots. If a company wants to succeed in multiple markets, leadership needs to hear and respond to the diverse voices that make up the community they hope to engage with.

How do you show that you respect and value diversity in your workplace?

To show that you respect and value diversity in your workplace, start by taking an honest inventory of the unconscious bias in the company’s leadership. Then, invite honest feedback from employees on where they would like to see improvement.

There are clear steps that every employee appreciates, like promoting pay equity and transparency, creating a strong policy on cases of identity-based harassment and bullying, and acknowledging holidays outside of the corporate calendar.

As far as hiring practices go, you do not have to go out and hire diverse people as a facade. Instead, adjust your hiring process to consider the need for culture addition and fit. As the statistics above show, hiring for cultural fit alone will inevitably lead to a monolithic team that will likely perform worse.

Diversity is not something that you perform to improve your corporate image — it takes genuine and consistent dialogue between a diverse leadership team and the diverse employees who comprise the company.

Is diversity in the workplace increasing?

Yes, diversity in the workplace is increasing. Over the next six years, the BLS predicts that diversity across almost all demographics will increase in the U.S. For example, forty-eight percent of Gen Z, the latest generation to enter the workforce, are racial or ethnic minorities.

Comparably only twenty-nine percent of Baby Boomers are, which means Gen Z is 65.5 percent more diverse—knowing that it is easy to see how the workforce will become progressively more diverse over time.

Josh Fechter
Josh Fechter is the founder of HR.University. He's a certified HR professional and has managed global teams across 5 different continents including their benefits and payroll. You can connect with him on LinkedIn here. 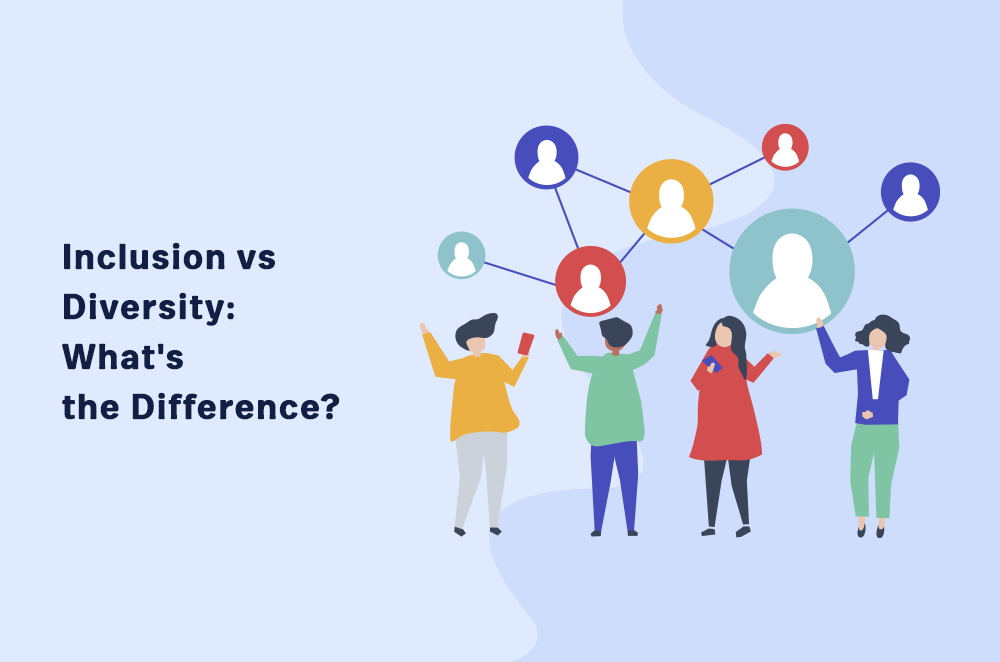 Inclusion vs Diversity: What’s the Difference? Published in Diversity, Equity, and Inclusion